Home » Break free from what holds you back » Letting Go » Which is you: leader, scout, follower, breadcrumb eater or…

Which is you: Leader, Scout, Follower, Breadcrumb Eater or… 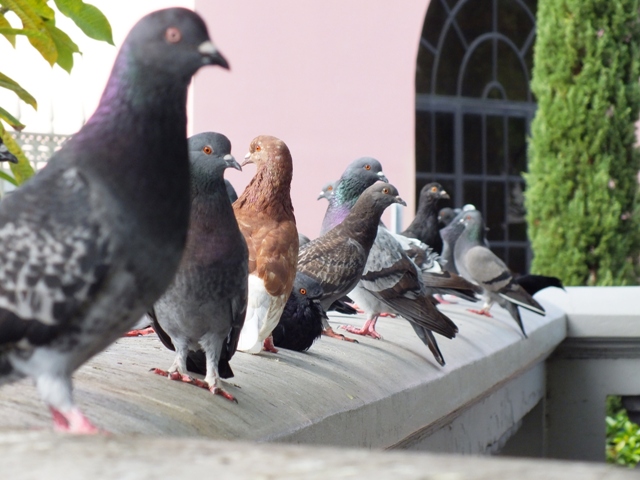 I’m looking through my living room window into the garden, wondering if the sick trees will recover when I see my neighbor spreading crumbs in the windowsill. She is a pigeon-lover and does this every day. We are both watching to see how long it takes for the pigeons to find the crumbs. She does this every day, hiding in the shadows and waiting to enjoy the satisfaction of the pigeons.

Today I’m watching because I’m waiting to be filled with stories, inspiration, articles, poems for my blogs. I often look to the trees for that inspiration. But today I’m getting it from this loving, magical relationship between humans and animals.

“How long will it take?” I wonder.

Not five minutes have passed when I see wings fluttering. But the interesting thing is that the pigeons do not land on the windowsill where the breadcrumbs wait for them, so easily attainable.

They are no fools, these pigeons. Two pigeons, one white and one with several shades of grey, land two stories above.

Grey Pigeon follows. It has been watching carefully. I guess it’s White Pigeon’s back up. Unfortunately, when it descends, the bird-feeder approaches too closely. Grey Pigeon sees the movement and flies away. It takes a  few minutes and the sight of White Pigeon gorging on everything to prompt Grey Pigeon to attempt another approach.

Finally —about ten minutes into the plot— both pigeons are feasting and two more join: Black Pigeon and Spotted Pigeon. They are eating so fast that almost all the crumbs are gone.

“Whew, these pigeons eat faster than I do,” I’m thinking.

Then I see the most surprising thing.

On the ground, six stories below, there’s an entire flock of pigeons gorging on the leftovers that fall from the windowsill.

I cannot help but laughing.

“We humans are not that different,” I think.

In our human culture, we have the Innovator Leaders, Pioneers, Geniuses and trailblazers.

Those are like White Pigeon. They go first. They dare to thread where no one has gone before, as Star Trek would put it. They take the risks, open new doors, chart the maps and set the trends. And —if they don’t get destroyed, then they hopefully get the first and bigger serving for their risk and hard work.

Then we have the Scouts and Trend Setters.

They are Grey Pigeon. They hang out with the innovators, geniuses and trailblazers because they recognize the power of being there first and they love discovery. They follow on the heels of the trailblazers; not too far behind, but far enough to get to safety if the adventure should prove unfortunate.

Then come the Trend Followers.

Those are the equivalent to Black Pigeon and Spotted Pigeons. They are the Entrepreneurs and Tribe Leaders who dare to follow a new trend because they are smart and they recognize when something works, when something new responds to the needs of the time. So they take a calculated risk —under the umbrella of the innovators, lead by the coaching of the Scouts. They are the mass that creates the movement and changes the consciousness so that the new trend becomes a way of life.

But most people stay at a safe distance from any high risk. They are Breadcrumb Eaters.

Like the flock six stories below, they watch at a safety and eat safely from the left overs.

The Breadcrumb Eaters observe what is happening but do not join too early and wait until its proven to be safe and sound. Then they rip the benefits of the trend once it’s established beyond a doubt. Once it is safe, popular and undoubtedly beneficial, they follow.

There’s common sense in this, the common sense of nature. If an entire flock would launch forward, they could all perish. So nature creates Leaders, scouts, Trend Followers and Breadcrumb Eaters.

In the human culture, however, there is still another sector. These are the Resisters.

They resist any and all new trends, holding on to the past, attached to the way things are —even when they complaint about it and it’s not serving them.

If the Trend Followers are careful and the Breadcrumb Eaters scared, the Resisters are conservative.

This is a level of conservation that is not found in nature because it goes against survival. It delays adaptation. I may be wrong, but I believe that this  is a particular human phenomena. Human beings hate the habit of attaching their identity to their circumstances —even when they hate these circumstances. Any change in circumstances is perceived as a thread to the self.

The human being has something that the pigeons lack: excuses. We can come up with arrays of excuses and rationalize our fear, our attachment and our resistance. So we do.

And there the human culture differs from the pigeons. We are as daring as White Pigeon, as smart as Grey Pigeon, as adaptive as Black Pigeon and Spotted Pigeon and as cautious as the Flock Below.

But we can also resist beyond what makes sense, beyond what is good for us. We can fight life, change and hold on to the past, staying behind our times.

Which pigeon is your match? Or are you on the no-pigeon zone of resistance?