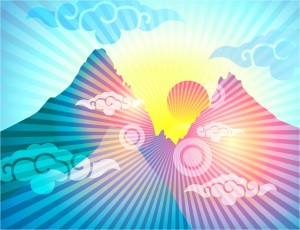 Whatever it is you want today…
Open a space for it.

Open a space in your emotions
so that they can sing it into space,
a frequency launched inside
a magnetic capsule that bursts
and attracts all the allies, resources, tools and materials
for it to show up in time and space,
for it to rain in possibilities, opportunities and synchronicity.

And if there’s anything or anyone inside or around you
shooing it away, denying it, doubting it, canceling […] 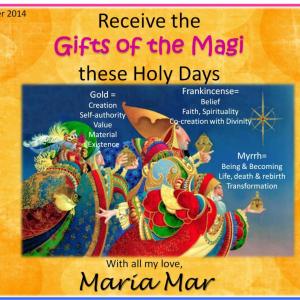 Reading Time: 8 minutes Receive the gifts of the Magi
during these Holy Days

In the Latino tradition, the Christmas story reaches its heights after the birth of the baby Jesus, during epiphany, when the Magi brought the newly born Jesus gifts fit for a king or a God.

There were probably many alchemists, astronomers, priests, seers and sages that embark in the long journey to that Bethlehem manger. They were the ones who could foresee the importance of this birth. They were leaders and visionaries. However, in the archetypal story passed on to us, they are all represented by the three Wise Men, three Kings or three Magi.
For these Holy Days, I want to champion you in receiving the three gifts of the Magi because with them you too can become a leader, an alchemist and a visionary.
You can make your dreams come true and embody your purpose for 2015.
Myrrh: the Gift of Being and Becoming

In some versions of the epiphany story the gift of Myrrh is ascribed to Balthazar, the younger alchemist. He is the Magi often portrayed as black-skinned and said to come from […] 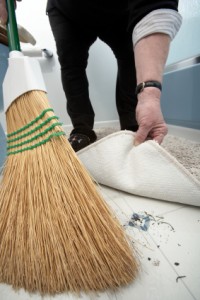 The phrase “to sweep under the rug” refers to hiding something embarrassing, to place it out of view.

I have found that we often sweep what we really want under the rug.
Click To Tweet

Not only we hide what we want —our dreams, desires, what makes us happy, even our goals– and keep on keeping on in an ordinary routine of life. We also hide the Essence of what we truly want.
One of the places where I see this more often is in people’s obsession with making more money.
There’s a popular attitude among many coaches and business people that if you really want to get clients, find a way in which your offer can make them more money.
And the fact is that making money is one of the top money-making topics, right there with losing weight.
In both areas, the essential desire is often swept under the rug.
Here’s what I mean.
I want Money!
There’s nothing wrong with wanting money.
However, from a shamanic perspective if you focus your manifestation in making money or making more money, you don’t have the […] 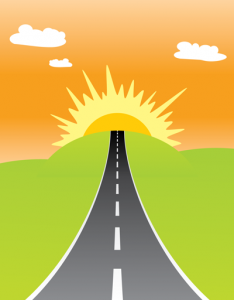 Reading Time: 4 minutes Facing a long-term problem?
You may be Walking your Sacred Road?
Shamans examine a person’s circumstances as either or all of three things: a Sacred Mirror, a Worthy Opponent or a Sacred Road.
I have introduced the Sacred Mirrors in this article and I have shared a shamanic story that illustrates the Worthy Opponent. Today I am going to talk about the Sacred Road.
This is not an easy thing to do today because I am grieving for a being who has lighted the world like few others, and who has gone off his Sacred Road this week, leaving a huge gap in our hearts. I am grieving for the actor, comedian and human being extraordinaire Robin Williams. Read my prayer for him here.
A Sacred Road is a path to your Personal Freedom that you are designed to travel for a while —probably a long while— in order to master the lessons you came here to embody and teach.
A Sacred Road can be a sickness or accident, a divorce or bankruptcy; a situation that takes you a while to travel, with lots of life […] 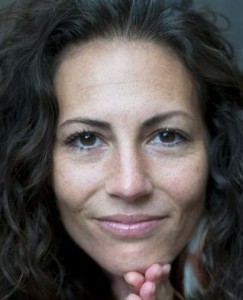 Reading Time: 6 minutes Hang Out with the Experts
I have been reading the eye-opening story of how Alexis Neely went from millions to bankruptcy and then recover her prosperity.
If you read yesterday’s daily inspirational words about what is the shortest distance from here to there, you may have felt that I failed to give you the specifics.
Alexis is sharing very specific points in her story and I highly recommend that you read it.
Finish reading this and then hop over to her thrilling series.
Alexis’ courageously shares a story that shows why I say that the shortest distance from “here” (where you are) to “there” (where you want to be) is to dive inwards to the center.
Here’s how Carl Jung said the same thing:

Your vision will become clear only when you can look into your own heart. Who looks outside, dreams; who looks inside, awakes.

You must Grow to the Stature of your Dream
What most impressed me about Alexis’ story (aside from the fact that I’m a fan of her truth-saying and out-of-the-box be-all-you are style) is the in-your-gut message: You have to be ready for your […] 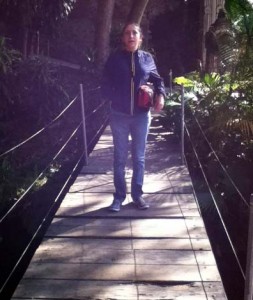 Reading Time: 2 minutes Wednesday Journey
Here’s the short answer to that question: Dive inside to the center.
If you have a dream that comes from the soul (not just a whim triggered by outside stimulus) ~then by the very nature of the universe, this dream is an expression of a part of you that you are now suppressing and that wants to be expressed.
You have a hard time believing this, don’t you?
Here’s what’s going on in a nutshell. Follow this layers to dive inside to the center in six steps:
ONE
This quality, lifestyle, goal, result or dream is an organic part of your purpose or lifeline. It’s bubbling inside. It’s calling you to free and express it. That’s the longing, the discomfort you feel.
TWO
Had you not been covered in layers of beliefs, self-perceptions and stories that say otherwise, you’d be living it right now ~that’s how organic to you, how part of you it truly is. The feeling of loss you have is not the lack of it, but the loss of connection to it.
BUT
THREE
The old stories you have attached to your Personal Identity hide this […]