Home » Creativity » Creating your world » Message from the Kogi, Keepers of the Earth 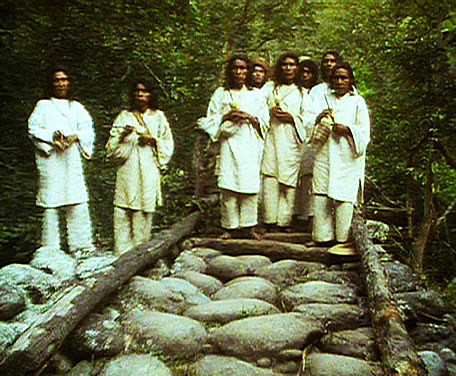 In 1990 the Kogi came down from the Sierra Nevada in Northern Colombia to give us a warning. These native are Earth Keepers and have been taking care of the spiritual and physical health of the Earth for thousands of years.

They survived the Spanish invasion of their lands by keeping themselves isolated but in 1990 they told BBC-TV that  it was time to send a message to the Younger Brother, as they call the rest of the people.

I share the message they delivered then because the Kogis are back with new and graver warnings. They can no longer protect the earth by themselves. The mountain they inhabit, a micro-cosmos where they could observe all climates on earth, is now getting sick. The Kogi are warning that now only we can stop the damage, and the time window is closing.

They could see that something was wrong with their mountain, with the heart of the world. The snows had stopped falling and the rivers were not so full. If their mountain was ill then the whole world was in trouble.

“The unique structure of Sierra Nevada de Santa Marta means that it is virtually a miniature version of the planet, and it represents every climate of the world. The mountain is quite literally a micro-cosmos, which contains every ecological zone in which most of the plants and animals of the planet can find homes.”

The Kogi message, delivered by the Mamas in the Chibcha language in the nuhue (ceremonial house), was translated into Spanish, and finally into English.

I share it below because we need to heed the warnings of these Keepers of the Earth. We have little time, but there is still enough time.

Here is the Message from the Kogi, Keepers of the Earth

“From the beginning in Colombia everything, everything remained as it was among us, the  native people; the same belief, the same mask, the same dance.  Everything well organized, in  order, a terrace for every animal.  ‘Younger brother was permitted in other places, other  countries.

There was a dividing line, the sea.  He said, ‘Younger Brother that side, Elder Brother this side.  You cannot cross it.’

Because this Colombia was the heart of The world, of the whole universe.

There were golden images, golden oracles.  The Mama prophesied with golden Bowls, he had a golden tuma, he had everything and Younger Brother took it all to another country.

Now the Mama grows sad, he feels weak.  He says that the earth is decaying.  The earth is losing its strength Because they have taken away much petrol, coal, many minerals.

A human being has much liquid inside.  If the liquid dries up we fall with weakness.  This same thing can happen to the Earth, Weakness makes you fall, weakness.

So the earth catches diseases of all kinds.  The animals die.  The trees dry up.  People fall ill.   Many illnesses will appear and there will be no cure for them.

We tell you, We the people of this place, Kogi, Asario, Arhuaco: that is the violation

Younger Brother thinks, ‘Yes! Here I am! I know much about the universe!’  But this knowing is learning to destroy the world, to destroy everything, all humanity.

The earth feels, they take out petrol, it feels pain there.  So the earth sends out sickness.  There will be many medicines, drugs, but in the end the drugs will not be of any use.

The Mamas say that this tale must be learnt by the Younger Brother.

After centuries and centuries of years the Younger Brother passed from the other country, says the Mama.  Senor Christopher Columbus came to this land and immediately saw the riches and killed, shot, many natives (The symbolic name for all invaders).  He took the gold which had been here.  Sacred gold, gold of masks, all kinds of gold.  They took so much.  So much.  So much.

Younger Brother thinks ‘Yes! Here I am! I know much about the universe!’ But this knowing is learning to destroy the world, to destroy everything, all humanity.

If all the Kogi die, do you, Younger Brother, think that you will also go on living?  Many stories have been heard that the sun will go out, the world will come to an end.  But if we all act well and think well it will not end.  That is why we are still looking after the sun and the moon and the land.” —

Let’s put our minds and hearts into restoring the balance we have offset on this beautiful earth. How can you help restore the balance in the trees? the waters? the land? the sky?

Use your talents, gifts, outreach, tools, knowledge and above all your passion and do an act. One simple act that can join the rest of our acts in a network of healing love to earth.

Let me know what you can do below. You’ll be my s/hero today!

More About the Kogi and their message

See the original Kogi message to BBC in this video